However, this interpretation of the Phillips curve can be too restrictive for several reasons.  The change in inflation dynamics may be attributed to structural changes in the economy such as a fall in energy prices, a rising share of services in the economy, a change in wage rigidity, and the role of globalisation.   These changes will in turn alter the Phillips curve and may have important implications for the conduct of monetary policy.  For example, a flattening of the Phillips requires a more aggressive monetary policy stance to control inflation.  Then, the cost of stabilising inflation is a substantial fall in output relative to its full potential.  Which means the so-called sacrifice ratio is very large.

This  Economic  Note  takes  these  challenges  into  account  and  estimates  a Phillips curve for South Africa in a flexible framework which allows the relationship between inflation and real activity to change over time.  Besides the slope of the Phillips curve, inflation persistence, which represents the degree to which current inflation depends on past inflation, varies too. In addition, we estimate the inflation target, the target bands, and the non-accelerating inflation rate of unemployment (NAIRU). Given that South

Africa is an open economy with a flexible exchange rate, it is appropriate to control for supply shocks such as import prices or the exchange rate. We implicitly account for these factors by allowing for variation in the variance of the error term of the estimated equation.

Figure 1 represents inflation together with the implicit inflation target and the estimated target bands. Interestingly the estimated band, between 3.25% and 6.41%, is consistent with the official target of 3 to 6%. The estimated inflation target  is relatively constant with a mean of 5.12%, and maximum and minimum values of 5.25% and 5.03%, respectively. These results are consistent with an implicit target of financial analysts of 5.51%, estimated by Kabundi, Schaling, and Some. Note that these authors use a different sample, from 2000 to 2013. Unlike these authors, this study allows the estimation of the target band. 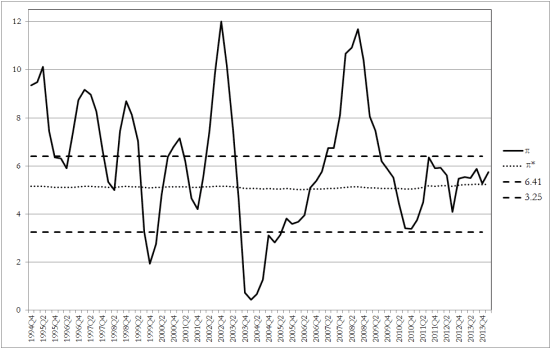 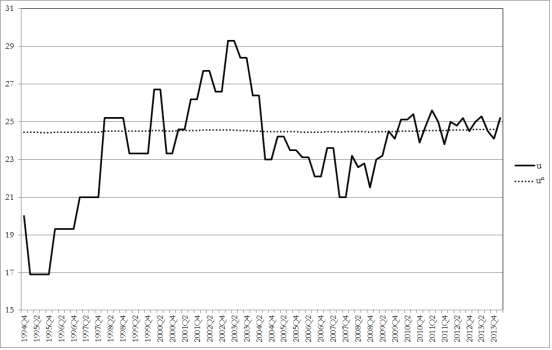 Similarly, the estimated NAIRU (un) in Figure 2 is relatively .at throughout the entire sample period, around 24.5%. Previous work suggests that the NAIRU for South Africa is about 25%. Figure 2 shows that the unemployment rate was lower than the NAIRU from 1994 to 1998. This period corresponds to rising economic activity in South Africa. Then unemployment stabilises somewhat around the NAIRU from 1998Q2 to 2001Q1. From 2001Q2 the unemployment rate rises markedly way above the NAIRU and stays high for approximately three years. During this period the economy was weak with a negative output gap. And from 2004Q3 until the recent .financial crisis the economy was at an expansionary stage and hence it created more jobs. Consequently unemployment decreased below the NAIRU for about .five years. The financial crisis pushed the South African economy into recession in 2009 which at same juncture exerted pressure on unemployment which rose back to the level of the NAIRU and it has remained stable ever since. The stability of unemployment around the NAIRU is consistent with a relatively constant inflation rate at the target level towards the end of the sample. The persistently high level of unemployment at the end of the sample closely mimics weak economic activity in South Africa since the financial crisis.

The relationship is blurred from 1998Q2 to 2001Q3, which in turn is followed by a positive relationship between the two gaps. This result suggests that during this period of 1998Q2 – 2001Q3, the South African economy experienced stagflation whereby a high inflation gap was explained by other factors than the unemployment gap. Note that, the domestic currency (Rand) depreciated significantly in 1998Q2 – 2001Q3. This may explain a rise in inflation while at the same time the economy was subdued.

The negative relationship between the two variables re-emerges in 2004 and remains in existence although weakens somewhat towards the end the sample. 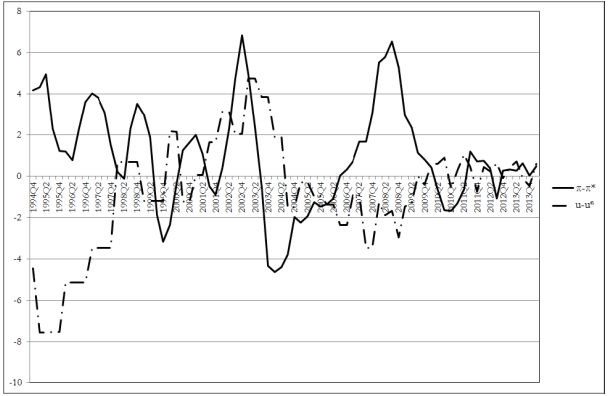 Even if the 2001-2002 cycles displays a large amplitude of 6.85%, it is short and lasts only a year. However, the 2002-2008 cycles is both long and with a large amplitude, reaching a minimum of -4.63%. This cycle lasts four years and peaks in 2008Q3 at 6.55%. The next section provides an in-depth analysis of the dynamic nature of the Phillips curve, but also the persistence of the inflation gap.

Parameter Estimates of the Phillips Curve

Bank’s target level the smaller the persistence in inflation and the smaller the effect of inflation expectations on inflation. In this case agents are mainly forward looking. As shown in Figure 5 our estimates suggest that the persistence parameter evolves over time and has increased from 1994 to 2001, remained high from 2001 to 2008, and eventually declined after around 2008. This indicates that inflation expectations in South Africa have been relatively more anchored and stable since 2008. As mentioned earlier, the SARB.s implicit target estimates are consistent with financial market analysts inflation expectations. Thus, this result would suggest that financial analysts inflation expectations have been relatively more anchored than those of the price setters (unions and businesses). Moreover, the financial crisis in 2008 followed by the recession in 2009 in South Africa opens the question of whether this behaviour of inflation expectations is the result of “good policy or good luck”. In fact, on the one hand, a decline in persistence parameter denotes an increase in policy credibility. On the other hand, independently of policy credibility, the global recession was marked by low levels of inflation around the world and agents may have expected these levels to persist over the near future.

Although at lower levels, the slope parameter has increased from 1994 to the mid 2000s and since then exhibits a slight downward trend. The decline in the slope parameter means that inflation has become less responsive to demand side factors. It suggests that the importance of unemployment as a driver of the inflation process has decreased.

The implication for disinflation policy is that the sacrifice ratio, which captures the increase in unemployment above the natural rate due to each percentage point decline in inflation, has increased. The results favour a policy which focuses on anchoring inflation expectations rather than trying to exploit any trade-o¤ between inflation and unemployment. Note that this pattern of the slope parameter is in line with the findings in most advanced economies whereby the slope of the Phillips curve has significantly flattened particularly after the great recession.

In this study we have estimated a Phillips curve for South Africa using a flexible framework which allows for change in the relationship between inflation and unemployment over time. Our results indicate that the slope of the Phillips curve has flattened since the mid-2000s – particularly after the Great Recession – which is in line with the findings in most advanced countries. In addition, we .nd that our estimated inflation target band from 3.25 to 6.41% is slightly higher than the official SARB target bounds of 3-6% band per the inflation targeting regime that has been in existence in South Africa since 2000. The estimated target is relatively constant with a mean of 5.12%. As it lies closer to the upper bound than the lower bound of the official target band this may be indicative of some accommodation of cost-push shocks.

With respect to the degree to the extent of which inflation expectations are anchored to the target our results indicate that the credibility of the SARB decreased from 1994 to 2001, remained constant from 2001 to 2008, and eventually increased around 2008.